RADIO continues to deliver results and grow! “It delivers the right message, to the right audience, at the right time!” Isn’t it time advertisers paid more attention to this #1 medium and the last thing people hear just before most purchases? Digital is filled with ad fraud, zero metrics and not ONE great marketing/branding ROI success story. Radio is full of wonderful long term success stories. If I was a marketer, I would use digital as a 2019 YELLOW PAGES and do long term radio with compelling professionally produced 30 second creative. My share, revenue and awareness would soar! Who’s up for it. #radioresults #mjmradio #salesfundamentalsca

Nielsen is out with its latest Audio Today report and it offers a familiar narrative: radio reaches more Americans each week (92% or 272 million people aged 6+) than any other platform. But with digital giants like Google and Facebook continuing to siphon off local ad dollars, the new report also compares radio’s monthly reach to various website and app functions. 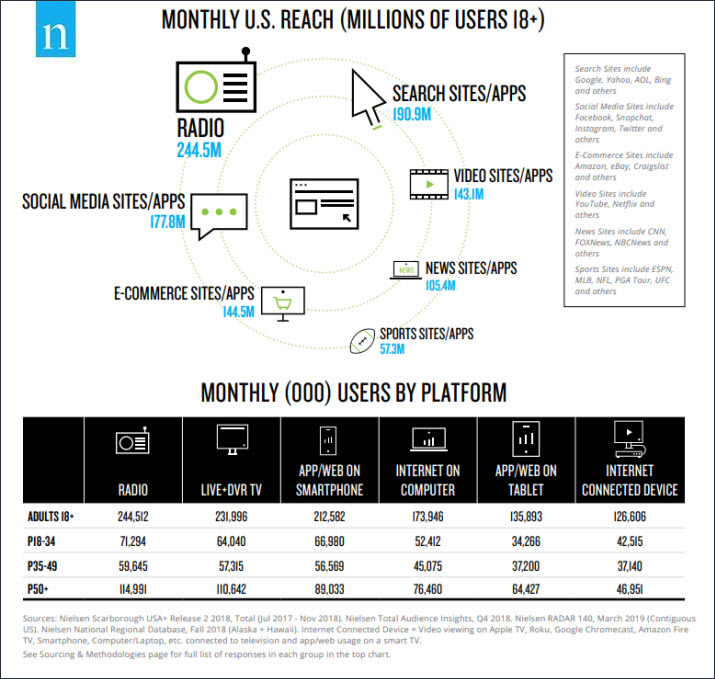 Radio’s top reach story has been well documented but Nielsen’s June 2019 cut of the data could help dispel lingering myths in the eyes of ad buyers about the media habits of younger demos. Some 66.9 million persons 18-34 access the web on their smartphone each month, using an app or web browser. While that’s a big number, it still falls short of the 71.3 million Millennials who tune into radio on a monthly basis.

Not surprisingly, adults 18-49 are the demographic that tunes in the most. The monthly reach for these listeners is 132.4 million (98% of the population), and Country is the format they prefer most. Adults 25-54 is the second most reached demo for radio, with 99% of the population (123.6 million) listening each month.

The new report arrives amid increasing media fragmentation and a screen overload that has marketers looking at audio in a fresh light. “A new trend is emerging: audio-based content is hip and decidedly in fashion,” Nielsen Audio Managing Director Brad Kelly says in the introduction to the report. “You’d have to be a hermit not to know that audio, in all its various forms, is increasingly winning the attention of American consumers. Podcasting, streaming and smart speakers are all shining new light on what’s being called ‘the other channel into the consumer’s mind.’”

In an affirmation of radio as a medium mostly consumed on the go, the data shows 69% of full-week listening occurs away from home and two-thirds (66%) of that away-from-home listening happens in the car. As you’d expect, those percentages are even higher during weekday drive times when 71% of listening takes place out of home and 71% of that is happening in the car. “Broadcast radio’s continued success and resiliency is due in large part to the enviable space it occupies in the automotive console,” Kelly says. “It’s free, ubiquitous, and at the fingertips of virtually every consumer on the road today.” In addition, radio’s peak listening hours of 7am-6pm mean it hits consumers during the day when they’re away from home and closest to the point of purchase. Radio’s captive audience in the car, is a “powerful advertising proposition,” Kelly says. And with increasing traffic and commute times, “radio will continue to reach a large segment of Americans when they’re on the move, offering advertisers the ability to deliver the right message to the right audience at the right time.” 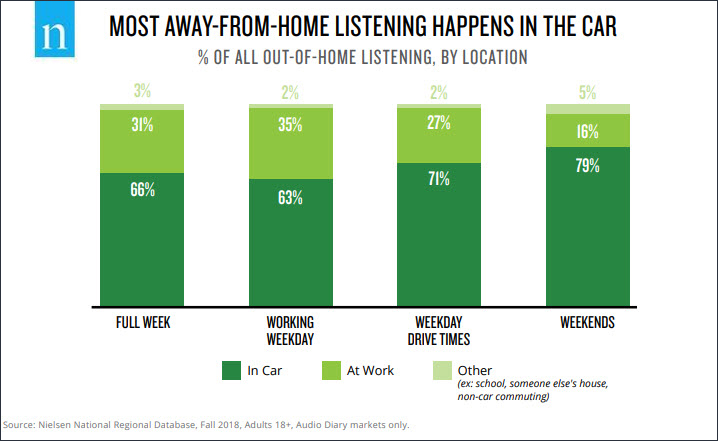 Although radio stands out from the media crowd, more and more advertisers are embracing a multi-platform approach, realizing that no one type of media can do the job by itself. “New advanced analytics and powerful media planning tools are helping radio capitalize on its mass appeal by delivering incremental reach when used in combination with other channels,” Kelly notes. “Understanding this cross-platform dynamic is more important than ever, and both buyers and sellers of media are developing an appreciation for how radio can supplement, augment, and amplify TV advertising.”